On July 6, 2014, St. Thomas’ welcomed Father Robert Ficks as Associate Pastor. Father Ficks was born in Cincinnati, Ohio. After graduating high school, he entered Kenyon College, a private liberal arts college in Gambier, Ohio. He attended Kenyon for one year and then enlisted in the US Navy spending four years as a Corpsman returning to Kenyon and graduating in 1969. It was there he met his wife, Ann. Upon his graduation, they moved to New York City where he worked for an advertising firm until 1981 when he entered Berkeley Divinity School at Yale graduating in 1984. He then became the Curate at Christ and Holy Trinity Church in Westport, CT.

In 1988, he became Rector of Saint John’s Church in Washington, CT, serving until 2007. Upon retiring from Saint John’s, he became the Priest-in-Charge at St. Andrew’s Church in Millinocket, ME, serving there until January 2011. He then moved to Columbus, OH, where he became Priest-in-Charge of Church of Our Savior in Mechanicsburg, OH, and Church of the Epiphany in Urbana, OH. Father Ficks served these parishes until the end of June 2014.

He and his wife have three daughters, one son, three granddaughters, and two grandsons. He is an avid hunter and fisherman and shares his love of the outdoors with his German Shorthaired Pointer, Patch. When less actively occupied, he enjoys bridge, cribbage, and reading. He is very much looking forward to meeting the people of St. Thomas’ and sharing the ministry with Reverend Leslie Nesin. Morning Worship & Holy Eucharist have been suspended due to the pandemic. We hope to return soon to gathering at 9:00 am each Sunday.

Find online services in the Diocese of Maine here.

Visit this page for a list of our favorite links. 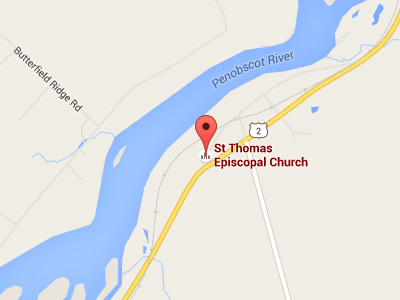 Map and Directions to Saint Thomas'